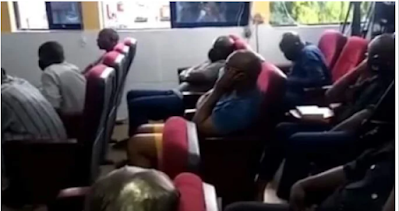 Frank Mba, spokesman of the Nigeria Police Force (NPF), says some of the suspects arrested over the invasion of the residence of Mary Odili, a justice of the supreme court, “forged documents”.

On October 29, security operatives invaded the Odili residence in Abuja to enforce a search warrant issued by a magistrate court in Abuja over allegation of illegal activities happening at the house.

Documents, however, revealed that the warrant presented by the security operatives bore a wrong address.

Speaking during the parade of the suspects on Thursday, the force spokesperson said the signature of Abubakar Malami, attorney-general of the federation, seen on one of the documents presented during the raid was “fraudulently obtained”.

“In the course of our investigation, we discovered that the man who was acclaimed to be a chief superintendent of police — Lawrence Ajodo — is in fact not a police officer; he is an impostor,” Mba said.

“He is not one of us, neither is he known to be an officer with any of the other primary law enforcement agencies in the country.

“We discovered that although the team — this syndicate — actually obtained a search warrant, that particular search warrant was obtained based on false representations that were made.

“The search warrant contained 9, Imo river street, but the house they attempted to gain access into actually is number 7.

“The crime was a well-conceived one with actors drawn from different fields of human endeavours. It was a web-like arrangement with members of the syndicate having backgrounds in different fields such as law, journalism, banking and even some rogue law enforcement agents.

“Impersonation, criminal trespass, perjury, forgery and other types of crime that might be uncovered against them will likely be contained in the charge sheet.

“We’ve also discovered that there is no involvement at all of the officials of the federal ministry of justice in this case.

“These criminals are loose cannons, who were all out forging different documents and trying to carry out their crimes under all kinds of false representation.”

Tags: MOST OF THE SUSPECTS FORGED DOCUMENTSODILI HOME INVASION