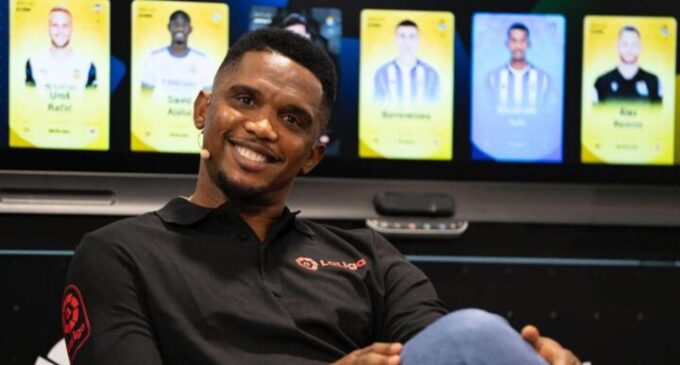 Eto’o beat Seidou Mbombo Njoya, the incumbent, by 43 to 31 votes to emerge victorious in an election that was held at the Hotel Mont Febe in Yaoundé on Saturday evening.

The four-time African Footballer of the Year, while declaring his interest in the position, had promised to launch the reconstruction of Cameroon football.

The 40-year-old had also said Njoya, who is also the fourth vice-president of the Confederation of African Football (CAF), had “failed miserably”.

The former Barcelona and Chelsea forward will be in charge of FECAFOOT when the 2021 African Cup of Nations (AFCON) will be hosted by Cameroon between January 9 and February 7, 2022.

The former Milan player won the AFCON twice with the Indomitable Lions in 2000 and 2002.

Eto’o then went on to Italy to play with Inter Milan for two years before leaving for Turkish giants, Anzhi Makhachkala.

He also had stints with Chelsea and Everton, both English Premier League (EPL) sides.

Four years after calling it quits on the international front, he announced his retirement from the pitch in 2019.