Arsenal may feel their captain’s armband is cursed. Pierre‑Emerick Aubameyang is the 10th player to have received, and relinquished, the role since Patrick Vieira’s departure in 2005 and it is hard to make a case that any of its bearers have been particularly successful. The long line of short-lived leaders speaks succinctly of the uncertainty that has dogged the club in recent years and Mikel Arteta will be exasperated that the issue of leadership has reared its head again over the past week.

Arteta might consider himself one of the few modern-day Arsenal captains whose tenure, between 2014 and 2016, did not end in rancour or plain disappointment, although he was out through injury for long periods of it. It was evident on Tuesday, though, that history lessons would cut little ice. “I think it is more than enough to discuss only that matter,” he said, making clear he would talk only about Aubameyang’s axing and not the ignominious trend it underlines. The immediate problem is stark: captain or not, what does Arteta do with his squad’s highest-paid player and one genuine global star?

That question had begun to rear its head even before Arteta dropped him for repeated disciplinary breaches, centring on problems with punctuality. “Without a question of a doubt,” he retorted to the question of whether, had Aubameyang been scoring goals at will, he would have found it as easy to take such drastic action. But the issue was moot. Aubameyang has found the net 21 times in his past 53 appearances, going back to the start of 2020-21, and this season’s tally of seven is bloated by a hat-trick against West Brom’s youngsters in the Carabao Cup. It is a record few mid‑table strikers would sniff at, but Arsenal have come to expect significantly more from their prize asset.

Now they risk being burdened with a high-earning 32-year-old who may find, a few weeks from now, that Arsenal have simply moved on. Unless he is recalled to face Leeds or Norwich in the next 12 days, Aubameyang will not be available again until Gabon complete their participation in the Africa Cup of Nations. That takes him beyond the top flight’s “winter break” and into February, effectively meaning he misses their next seven Premier League games. 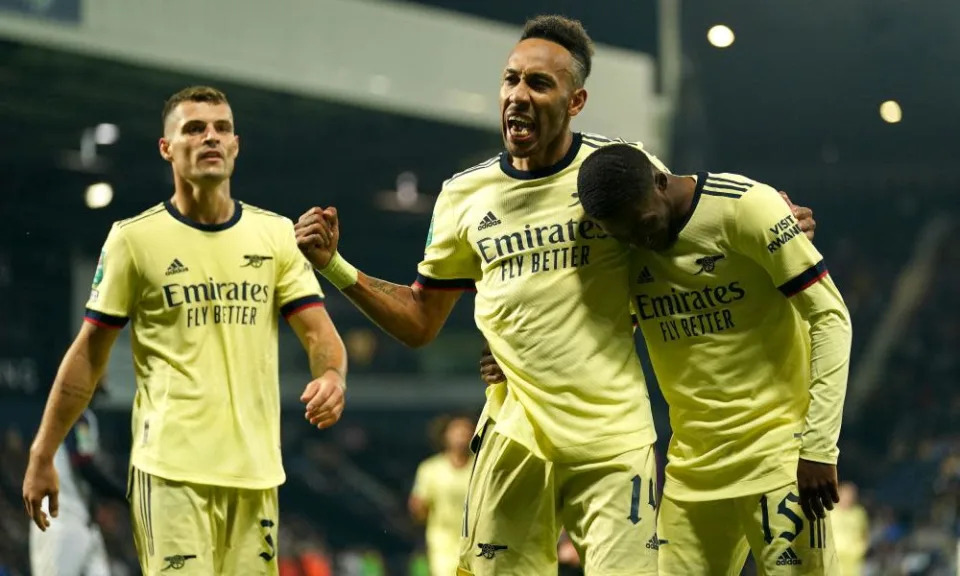 Given that Emile Smith Rowe and, more recently, Gabriel Martinelli have excelled in Aubameyang’s old perch on the left, while Alexandre Lacazette has added hold-up ability and presence up front, it is hard to see where the elder statesman fits in if Arsenal enjoy a profitable winter run. Their attack clicked against an admittedly poor Southampton in his absence, after an iffy start, and it is the one area of the side in which Arteta is yet to attempt a full-blown overhaul.

While a better-functioning frontline may be an inadvertent consequence of Aubameyang’s exile, it is not hard to see the potential pitfall. Arsenal already have a lengthy to-do list in that department, with Lacazette able to court a pre-contract agreement elsewhere given that no new deal is in sight and Eddie Nketiah recently turning down fresh terms. The chances of coaxing a tune from Nicolas Pépé appear to be plummeting and Folarin Balogun, the vaunted young striker, will be loaned out at least once before he comes under serious consideration. If Aubameyang cannot be reintegrated successfully the required short-term overhaul becomes far bigger, not least because a salary package of about £300,000 a week cannot be allowed to gather dust.

Arsenal have been there before, even if the popular Aubameyang’s situation cannot be directly compared to that of Mesut Özil at this point. Arteta has made good habits and “non-negotiables” a priority since taking over and, while there have been bumps in the road, he has largely been successful in changing the dynamic and sense of purpose around their London Colney training ground. “We have come very, very far and you can only see that probably when you are around here,” he said. “But it’s still not there and we had another incident that reflects we are still not there.”

Nobody can sensibly write off Aubameyang’s Arsenal future yet. Most onlookers thought Granit Xhaka was finished when he stormily tossed the captaincy away, but the midfielder has been rehabilitated as a key member of the squad under Arteta. Supporters have not turned against Aubameyang as they Xhaka; on the flip side, Xhaka’s flashpoint did not occur on Arteta’s watch.

The immediate prospects of Arsenal’s most recent captain may depend on whether he is willing to become just another squad member: Aubameyang has also been axed from the manager’s “leadership group”, essentially meaning his voice no longer carries more weight than those of his most junior teammates.

“I am here to make the right decision every day and to defend the club,” Arteta said. “To be consistent in something that we want to do, on and off the field, we have to be consistent in our decision-making.” A little less wearying predictability regarding the fate of their captaincy would serve them equally well.