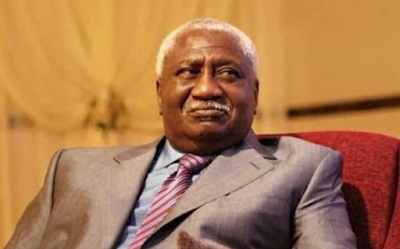 A pre-action notice has shed some light on the nature of the face-off between Modupe Alakija and a member of Ikoyi Club 1938 who has now been identified as Ashish Gajja.

Modupe, the lawyer, is the husband of Folorunsho Alakija, the billionaire businesswoman extolled as Africa’s richest woman.

The legal practitioner was handed a one-year suspension at the club for allegedly assaulting Gajja.

In a circular, Ikoyi Club said the suspension would run from December 2021 to November 2022.

However, in a response filed by Modupe, the lawyer detailed the nature of the face-off that caused the altercation.

He claimed that Gajja had “rudely and crudely” reprimanded him for momentarily removing his face mask.

“Evidence had been given to the committee that I came into the premises of the Club with my police escort. The police escort was in my car, came out to open the door of my car in front of the clubhouse, and drove away,” he said.

“On entering the clubhouse, I observed all the protocols including the wearing of a mask.

“There was a friendly discussion between the protocol staff and I on whether an officer duly empowered and armed under an extant law of the national assembly could be stopped from entering any premises in Nigeria.

“…except certain parts of airports and airplanes. My mask was taken off while having the debate with the protocol staff. All these took place at the entry point and not in any other part of the Club House.”

Modupe said Gajja, without knowing the subject of the debate, proceeded to charge at him to put on his mask.

“In reply to his crude and unethical manner, I told him to f**k off and mind his business. In gross violation of my right to privacy, he brought out his camera and started to videotape me without my consent,” Modupe continued.

“On his refusal to delete the photos as I demanded, I decided to hold on to his shirt in order to stop him from absconding and taking my pictures away with him.

“The inspector-general in his discretion decided to give me a police escort as I am at risk of being kidnapped. My photograph might end up in the hands of kidnappers or assassins that prowl the streets of Nigeria.

“The complainant in his letter admitted that he knew that the Club had its own CCTV. But being a busy-body [he] decided to carry out his illegal act.”

As of October when the response was filed, Modupe said he had commenced proceedings against the complainant at the high court for a grant of relief following the alleged breach of his constitutionally guaranteed right.