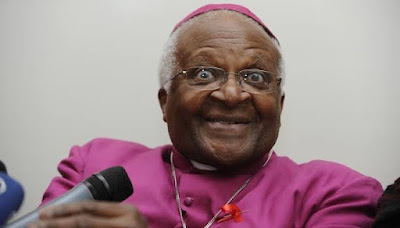 It was earlier reported that Mr Tutu, a retired Anglican archbishop, died on Sunday morning in Cape Town South Africa.

Paying tribute to the late Archbishop in a tweet the UK prime minister said he was deeply saddened by Mr Tutu’s death.

He said the late archbishop was a critical figure in the struggle to create a new South Africa.

“I am deeply saddened to hear of the death of Archbishop Desmond Tutu. He was a critical figure in the fight against apartheid and in the struggle to create a new South Africa – and will be remembered for his spiritual leadership and irrepressible good humour,” Mr Johnson wrote.

Also, the Archbishop of Canterbury in a statement said Mr Tutu’s love transformed the lives of politicians and priests, township dwellers, and world leaders.

He said the late archbishop “embodied the hope and joy that were the foundations of his life.”

He described Mr Tutu as a leader of principle and pragmatism who gave meaning to the biblical insight that faith without works is dead.

On his part, former Mr  Abubakar said his departure “on such a significant day befits the treasure that the life you lived was.”

Also, Ugandan opposition leader Bobi Wine said he was saddened by the news of the Archbishop’s demise.

“The news of the passing of Archbishop Desmond Tutu is very sad. A giant has fallen. We thank God for his life- a purposeful life truly lived in the service of humanity. May his soul rest in peace. Condolences to all people world-over who were touched by his life and ministry,” Bobi Wine wrote.

Described by political elites and observers as the moral conscience of his nation, Mr Tutu  was born  in Klerksdorp,   South-West Johannesburg where he trained as a teacher before becoming an Anglican priest

The anti-apartheid activist was diagnosed with prostate cancer in the late 1990s and had in recent years been frequently hospitalised for infections associated with his ailment.

With God all things are possible!