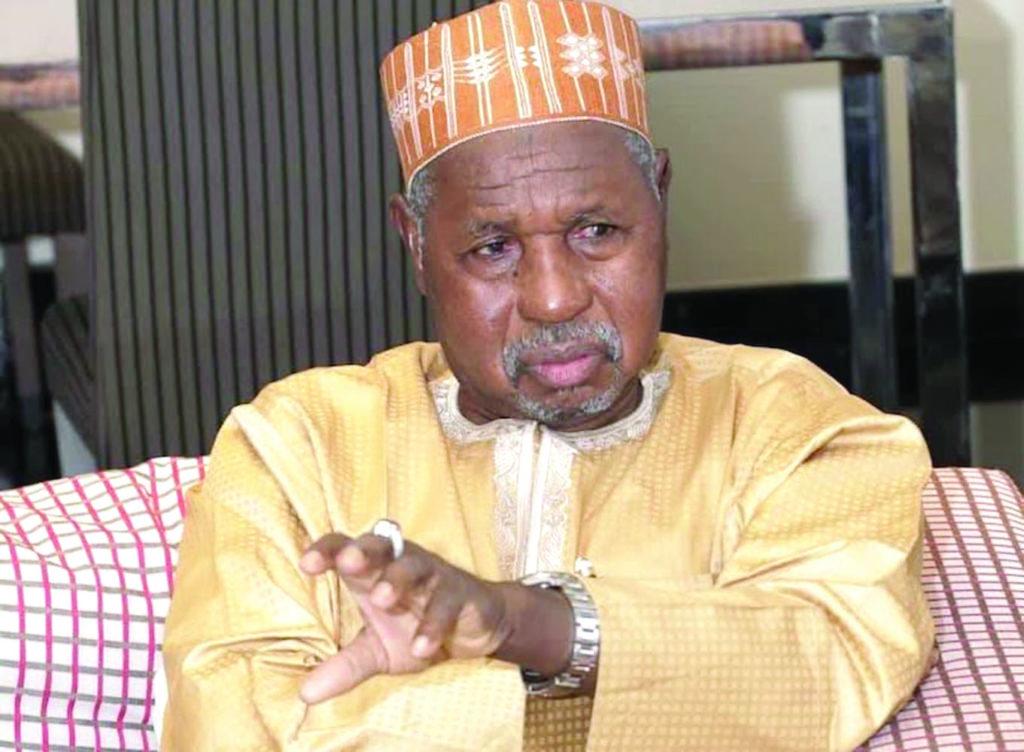 LAGOS — Desire by Governor Aminu Masari of  Katsina State, to acquire arms for citizens residing in the state  with a view to protecting themselves from incessant attacks  by bandits now ravaging the North West has drawn mixed reactions from across the country.

The Northern Elders Forum, NEF, Middle Belt Forum, MBF, Pan-Yoruba socio-political organisation, Afenifere, Ohanaeze Ndigbo, Christian Association of Nigeria, CAN, among others, described it as a clear indication of failed governance, and unfortunate.

Masari, governor of President Muhammadu Buhari’s home state, who featured on a BBC Hausa programme had, while discussing with journalists in Katsina, said the number of police operatives in Katsina State was less than 3,000.

He expressed readiness of his government to assist citizens who would want to acquire arms to do so to contribute in restoring normalcy.

Recall that Katsina has been worst hit by bandits in recent times.

He said:  “Security is everybody’s affair, irrespective of political difference. What the public should know is that in Katsina,  you don’t have up to 3,000 police(men). Therefore, we are calling on whoever wants to protect himself and his family to acquire arms.

“The religion of Islam has allowed a person to protect himself and his property and family. If you die in the course of protecting yourself, you die a martyr. The annoying fact is that bandits have access to guns and good people don’t have access to these guns with which they can protect themselves and their families.”

The governor said his government would assist any person, who would like to acquire arms in order to stop banditry.

“We will assist those who want to bring in arms because there is need for the people of Katsina to support the security agents,” he said.

The Northern Elders Forum, NEF, in its reaction, said Nigeria is suffering a leadership vacuum.

NEF Spokesman, Dr. Hakeem Baba-Ahmed, lampooned the governor’s idea, noting that the use of lethal weapons by ordinary citizens in Nigeria was still banned in the country.

He said: “If indeed the governor had said this as reported, we should expect him to lead people who elected him with advice on how and where to acquire, train and use weapons that are currently banned to the public by the law.

“This crisis of insecurity is taking many casualties, one of the most important being village heads.

“There is a growing vacuum in thinking and leadership that makes for stories such as this to sound almost credible.

“Is it really the case that President Buhari cannot sit with governors and managers of our national security and discuss all the roots, dimensions and solutions to these problems without the temptation to prescribe do-it-yourself solutions?”

The Middle Belt Forum, MBF, said the pronouncement by Governor Masari was an indication of a government that has failed in the country.

“Any arming of citizens to defend themselves has to be through an organised structure. Simply put, we should have state police, local government police, county police and have true federalism, just as it is in America, whose constitution and governance we are copying.

“Governor Masari’s statement is an indication of frustration. The governor forgot about anything and dwelt on one aspect only, that is the right to self-defence.

“That he has made that statement is a wake-up call for all Nigerians that a governor has now openly come out to say that the federal system that controls the police, the army and all the paramilitary forces has failed the people and therefore, we are living in a failed state.

“It is high time the legislature of this country passed a law to allow for state police, local government police and decentralization of this federal control which has failed.

“As far as I am concerned, that is what it portends. It calls for confusion but all the same, it sends a message and that message should be a wake-up call for all of us.”

He said: “It is unfortunate because it further exposes the paucity of deep thinking at the level of governance in Nigeria.

“Saying that citizens would be given arms to defend themselves as a way of addressing the insecurity problem in Katsina is almost like saying that you are to ‘democratise’ crime because crime could not be controlled.

“What sort of weapons would the government give the citizens that would be as sophisticated as the ones in the hands of terrorists?

“And, what is the guarantee that those saddled with the responsibility of procuring the arms would not divert parts of it to the terrorists?  The same governor earlier negotiated with the terrorists the other time, including paying them ransom — as reported.

“That did not stop terrorism from festering. What gave him and his advisers the confidence this new idea will work the magic?  In any case, where will the money for the arms come from? From a budget that has no provision for such?

“Governor Masari and those who may be thinking like him should perish the thought. They can eat the humble pie, admit that they can no longer find solutions to societal problems. They can then seek for genuine help or resign.

“Nigeria and Nigerians deserve far better than what we are getting from our governments. Too bad.”

Laughing for long after Governor Masari’s position was relayed to him,  President General of Ohanaeze Ndigbo, Prof. George Obiozor said such suggestion indicates that governance of confusion was now complete in the country.

“With that proposal, the problem of Nigeria is getting confused. With that, governance of confusion is complete,” Obiozor said, laughing it off.

The Christian Association of Nigeria. CAN, said the call by Bello Masari for citizens residing in Katsina State to acquire arms with a view to protecting themselves from the incessant attacks by bandits was not new, adding that it was an admission that the security forces cannot defeat the bandits.

It, however, said that the concern of the apex Christian body was that the security agencies would seize the opportunity to arrest harmless citizens, who blindly heed the governor’s advice.

CAN’s Vice-Chairman (Northern region), Rev. John Hayab, said the call by Masari was a subtle admittance of the inability of the security agencies to prevail against the criminals.

Hayab said:  “The public talk by Masari about self-defence is not new to us and our constitution.

“The only concern we have is that our security agencies will use this to arrest more victims, whose only sin is having guns to defend themselves while the criminals will continue to wreak havoc and will not be arrested.

“When a serving governor repeatedly makes the type of comment that  Masari is making, which, to my knowledge, is the second time he is saying that citizens should get weapons to defend themselves, then know that he is aware that our security forces cannot defeat the bandits.

“It’s unfortunate that our leaders would advise citizens who are still waiting for a miracle to happen with regards to defeating the bandits to wake up and perform the miracle themselves.

“Those we have been praying and hoping that they will defeat the terrorist for us are saying that they cannot help us.”

ADF spokesman, Abia Onyike, said that if the Federal Government continues to handle the bandits with kids gloves, Governor Masari’s suggestion may be the last option for Nigerians.

“ADF believes that self-defence is the first law of nature. And certainly, it may not be out of place for people to look for ways of defending themselves if the Federal Government continues to prove that it is helpless in the current state of insecurity in Nigeria.

“The acquisition of defensive measures by the masses will create a balance of forces and the terrorists and bandits may begin to retreat if they realise that they have no monopoly of violence,” he said.

Reacting,  National Publicity Secretary of Arewa Consultative Forum, ACF, Emmanuel Yawe, said: “If he (Masari) does it within the provision of the law that will be okay. However, it will be a tragedy if a governor will do anything that will lead to a further breakdown of law and order.”

It’ll balance use of terror by bandits — Arewa Defense League

Meanwhile, Arewa Defense League in a statement  by Mutala Muhammad, said:  “We  welcome with optimism plans by Masari, to acquire weapons to defend themselves against rural bandits and other criminal gangs .

“The apparent failure of our military and other law enforcement agencies to protect citizens from bandits and other dangerous criminal has created an atmosphere where heavily armed bandits operate freely in the North West and parts of Niger State with impunity as they rape, plunder, maim  and kill citizens with reckless abandon.

“A number of opinion leaders and associations had called on communities to take up arms to defend themselves as some people feared that such calls if hindered could degenerates into anarchy.

“With this initiative by the governor to assist communities armed themselves with some sort of official regulation, it will balance the use of terror by these criminals thereby, reduce the number of these frequent attracts on communities.”

Only collective action by northern govs will work — CNG

Also, Coalition of Northern Groups, CNG, while reacting through its spokesperson,  Suleiman Abdulaziz,  said: “That is nothing but an afterthought from leaders, who have turned down every suggestions for collective approach to the security situation in the North.

“The northern governors in particular have refused to act on the advice to design a uniform approach as against the current isolated approaches, which have not worked and have no promise of yielding results.

“It is common knowledge that whenever the gangs of criminals are attacked and dislodged from one state, they slip into other states with ease. Unless by this new resolve Masari means he will mobilise his fellow governors of the frontline states to agree to a common, regulated action, it will amount to just another exercise in futility

“Serious challenges such as the one we are faced with ought not be treated with the level of levity and condescension shown by the governors of the affected northern states, neither should they be seen as affecting only one region or state or, for that matter, one ethnic group or the other. On the contrary, such challenges are cross-national issues that affect every one of us regardless of where we live or come from.

“For this reason, the security problem must be confronted collectively with the entire will and resolve of the people behind the effort. Failure to do so will indubitably mean that every effort made in isolation such as this one being proposed by Masari, will defeat all the endeavours, and render the task of ending the crisis the more difficult and futile.

“Every one of us must, therefore, become a stakeholder and a committed actor in this struggle to free our society and our country of this debilitating problem.”

Meanwhile, Brig Gen Idris Bello (retd), said: “There are lots of disadvantages in arming the populace because even in developed countries, there is still a problem of proper ‘gun control.’ Therefore, there is likely to be a lot of abuse or misuse over here. But in our present circumstances, I fully support the Idea.”

Tags: FOR SELF -DEFENCEMASARI BIDS TO ARM CITIZENS

Embassy Denies Claim of 1.5m Nigerians in Need of Passports