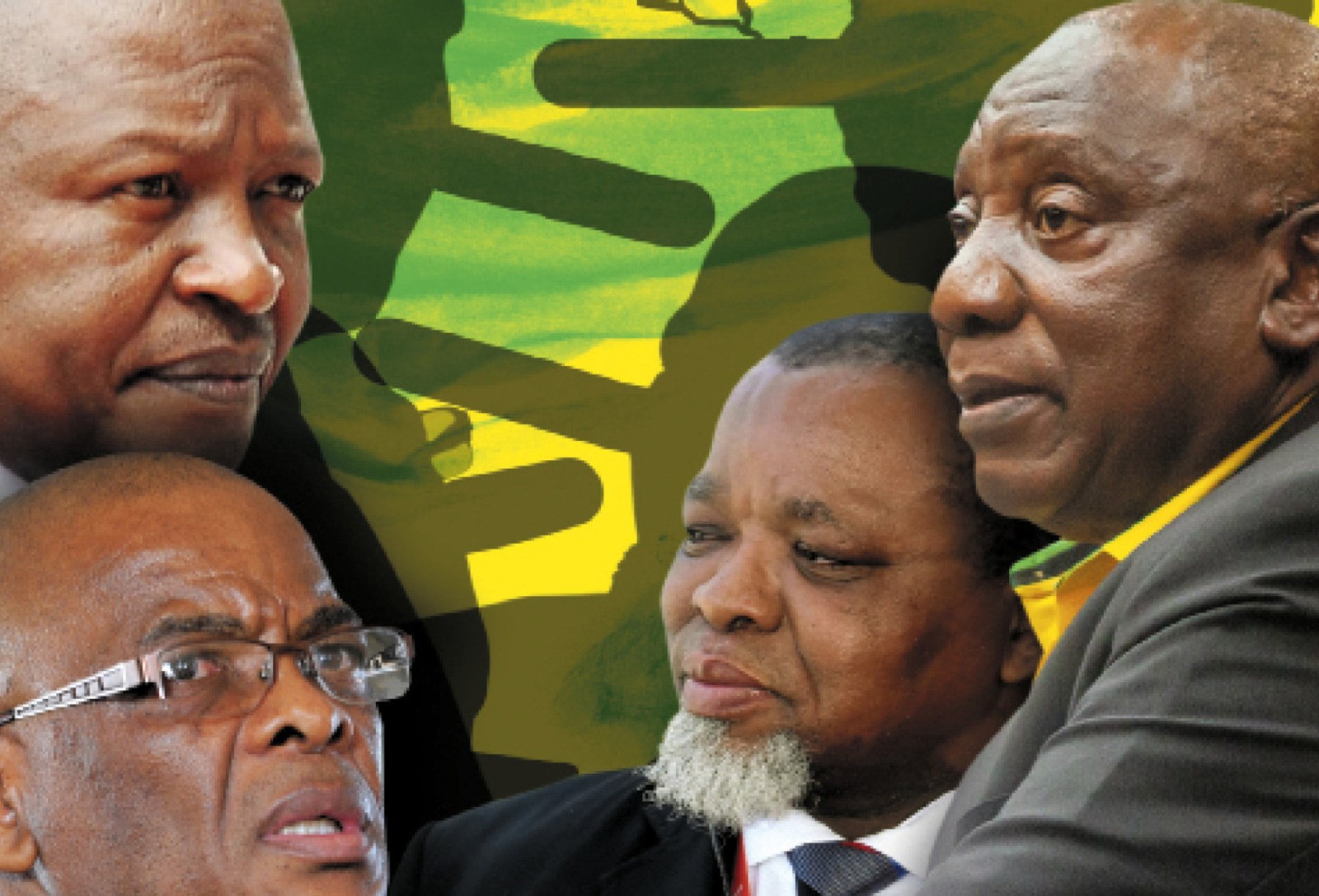 The minutes of the ANC’s deployment committee offer the first public glimpse into the workings of this mysterious body. They also reveal that in court papers and submissions to the Zondo Commission, ANC leaders, including President Cyril Ramaphosa, have repeatedly misrepresented the powers and function of the committee.

When President Cyril Ramaphosa appeared before the Zondo Commission on 28 April 2021, Judge Raymond Zondo asked him whether the ANC would ever discuss potential judge candidates, and express preferences on candidates. The question was asked in the context of the ANC’s deployment committee, which Ramaphosa chaired in his capacity as deputy president and about which he was testifying.

“Not as far as I am aware,” Ramaphosa responded, before clarifying a few moments later: “I do recall once where [judicial] vacancies were mentioned and it was just in passing… it never resulted or descended into saying this [candidate] would be good.”

The clear impression Ramaphosa gave to the Zondo Commission, and South Africa at large, was that assessing candidates for judicial vacancies fell beyond the remit of the ANC’s deployment committee. Yet, as the now-public deployment committee minutes show, this was untrue. On at least one occasion during the limited period covered by the minutes – 22 March 2019 – the committee is shown discussing and recommending candidates for upcoming judicial posts.

“It is concerning that President Cyril Ramaphosa, as the former chairperson of the ANC’s cadre deployment committee, may have made an untruthful statement to Judge Zondo during his testimony in front of the State Capture Commission,” DA MP Leon Schreiber, who pushed for the public release of the minutes, told DM168.

But Ramaphosa’s misrepresentation is just one of multiple untruths conveyed by ANC leaders – all under oath – while defending the party’s cadre deployment policy, a DM168 investigation suggests.

A court affidavit in the name of ANC deputy secretary-general Jessie Duarte, dated 23 July 2021, swears that the deployment committee “generally” does not get involved in appointments “for independent institutions (including the judiciary)”.

Yet the minutes record deliberations not just over the judicial appointments, but also over appointments for at least two other “independent institutions”: the South African Human Rights Commission and the Commission for the Promotion and Protection of the Rights of Cultural, Religious and Linguistic Communities. These are both Chapter 9 bodies, whose independence is enshrined in the Constitution.

Duarte’s affidavit, which was submitted in response to the DA’s application to have the minutes released, also states definitively that the committee does “not get involved in the appointment of ambassadors”.

Ambassadorial vacancies are in fact discussed on 3 December 2018; in the same meeting, one of the resolutions is to “work on foreign deployments”. On 8 March 2019, “Cde Supra” [presumably former North West premier Mahumapelo] is described as being “available for international deployment”.

Moreover, Ramaphosa told the Zondo Commission on 12 August 2021 that ambassadorial appointments are indeed within the scope of the committee.

Duarte further states in her court papers: “I must stress that the deployment committee does not say to the minister that any of the persons [shortlisted for a position by a Cabinet minister] are not eligible.”

This is again explicitly contradicted by Ramaphosa’s testimony to the Zondo Commission. The President made a point of noting, in fact, that for Cabinet ministers to get lists approved by the deployment committee is “not an easy process”, saying: “I know of ministers who have been there three times or more just to get a list recommended.”

This reality is also reflected by the minutes. Transport Minister Fikile Mbalula’s nominations for the Cross-Border Road Transport Agency are recorded as being rejected by the committee on 30 November 2020 because of “issues raised with regard to processes being followed and the candidates and the make-up of the board”.

Former ANC secretary-general and current Mineral Resources Minister Gwede Mantashe, appearing before the State Capture probe two days after Ramaphosa, stated: “The committee takes a mere interest only in those vacancies which it considers strategic and which could advance the development agenda with the state, such for the post of director-general.”

Duarte’s affidavit claims similarly that the committee “gets involved in the civil service i.e. the top leadership, at director-general level”.

The mystery of the missing minutes

It is clear that the ANC is unhappy about the release of the deployment committee minutes. The party has refused to comment on their content, and when DM168 contacted ANC spokespeople for comment last week, we received a call from ANC legal adviser Krish Naidoo informing us that the minutes had been released in error.

Although the DA had made two separate legal attempts to obtain the minutes – via a Paia (Promotion of Access to Information Act) application and ongoing litigation – neither of these had yet met with success when the Zondo Commission was found to have quietly released the minutes on its website as part of a bundle of documentation relating to the testimony of Ramaphosa.

Included in that documentation is a letter from Naidoo to the Zondo Commission dated 6 August 2021, which states that the ANC wishes the commission to treat the minutes with “the requisite degree of confidentiality”. Naidoo specifies that the ANC is submitting the minutes “for information purposes only” and not as “part of the information which the Commission is at liberty to publish”.

Although the Zondo Commission had asked for minutes of the deployment committee for the entire period of State Capture, it was informed by ANC lawyers that minutes from 2012 to 2018 were unavailable. The only minutes supplied cover the period from May 2018 to 2020.

When questioned about this at the commission, Ramaphosa claimed that minutes had not been taken during the period when he was chairing the committee – or, at least, he could not recall ever going through minutes. This he attributed to the ANC’s “rather unfortunate record-keeping processes”.

Commission evidence leader Paul Pretorius responded that this seemed “implausible”, given that the party in fact had a strong history of record-keeping in significant meetings. Ramaphosa stuck to his guns, but the notion remains that it seems impossibly convenient for both the ANC and the President that no record was kept of any deployment committee meetings during the Zuma years where Ramaphosa oversaw the committee.

Further undermining the claim that previous minutes simply were not kept is the fact that the first set of minutes released, for 11 May 2018, start by adopting the minutes of the last meeting.

The role of the deployment committee in State Capture

The reason the ANC might wish to conceal the minutes of the deployment committee meetings held during the Zuma administration is not hard to see. With the committee’s existence already receiving a public hammering, particularly from the DA, hard evidence that it directly contributed to State Capture by recommending compromised individuals to key state roles would likely make its continuation untenable.

But there is already some proof that this is indeed what happened. An affidavit fragment contained within the bundle of documentation linked to Ramaphosa’s testimony released by the Zondo Commission states: “It must be borne in mind that all appointments to the boards of SOEs [state-owned enterprises] must also be approved by the African National Congress Deployment Committee… The 2015 [Denel] board was no exception.”

This is particularly significant because Judge Raymond Zondo, in his first report, has already identified the boards of SOEs as being among the key enablers of State Capture.

Ramaphosa was asked by Zondo whether it would be “fair” to assume that “when it came to board members and chairpersons of important SOEs such as Transnet, Eskom, Denel, SAA, as well as their CEOs”, their appointment would have gone through the deployment committee of the ANC.

After some equivocation, Ramaphosa responded: “The expectation would be yes.”

In his report, Zondo would go on to conclude that the collapse of once-thriving SOEs was at least partly linked to the fact that “most, if not all, of these entities were led by Chief Executive Officers and Boards of Directors who would have been approved by the ruling party through its national deployment committee”.

What the committee is designed to do and why

Numerous ANC figures have explained that the deployment committee was originally set up as a necessity when the party came into government and was confronted with an all-white civil service. The committee was intended to ensure that the civil service was racially transformed and also, to quote a Zondo Commission affidavit submitted by Mantashe, “to ensure that bureaucratic sabotage by reactionary forces, intent on undermining the democratic order, would be minimised”.

There is little disagreement that a policy of cadre deployment was indeed necessary under those circumstances. In recent years, however, the question of whether the committee’s function is still necessary – or even lawful – has come under increasing scrutiny.

This is the case even within the ANC itself. Current Finance Minister Enoch Godongwana told Newzroom Afrika in 2021 that the ostensible objectives of the committee, in terms of racially transforming the civil service, had undoubtedly already been achieved.

“Is there a necessity to continue doing [the policy of cadre deployment]?” he asked. “That’s a debate we should be engaged in.”

Former public enterprises minister Barbara Hogan has made no secret of her scepticism about the committee, telling the Zondo Commission in 2018: “How can just a handful of people possibly have the institutional knowledge and resources to pronounce on suitable candidates for every senior position in government and the private sector?”

The publication of the committee’s minutes has added fuel to the debate. The DA has already called for an investigation into every public service position filled by the committee.

“The minutes confirm that the real powers of appointment are not located in the state, but are instead outsourced to a subcommittee of a political party. Appointment decisions are therefore predictably made in the best interests of the party, rather than of the country,” Schreiber said in a statement this week. DM168

This story first appeared in our weekly Daily Maverick 168 newspaper which is available for R25 at Pick n Pay, Exclusive Books and airport bookstores. For your nearest stockist, please click here.