There was drama on Wednesday at the Peoples Democratic Party (PDP) governorship primary election in Ekiti.   Some delegates were seen .. 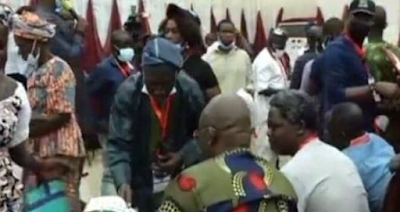 There was drama on Wednesday at the Peoples Democratic Party (PDP) governorship primary election in Ekiti.

Some delegates were seen showing their ballot papers to Ayodele Fayose, former governor of the state, while on a queue to cast their votes.

At some point, the governor raised his hand to hail a delegate who had showed him his ballot.

The practice, however, negates the system adopted for the election as voting was supposed to be by secret ballot.

It’s not been confirmed whether delegates were paid to vote for a certain candidate.

Earlier in the day, Biodun Olujimi, an aspirant in the race, pulled out from the contest saying she was disenfranchised by the party.

Meanwhile, Bisi Kolawole, a former chairman of the PDP in Ekiti and Fayose’s preferred candidate, has been declared winner of the poll.

FACT CHECK: Atiku made several claims in Arise TV interview — but how many are factual?TheCable checked some of the claims, and here is what we found.

Ademola Adeleke: How I built multi-million dollar business in US

KAMARU USMAN: Why I chose ‘Nigerian Nightmare’ as nickname