KAMARU USMAN: Why I chose ‘Nigerian Nightmare’ as nickname 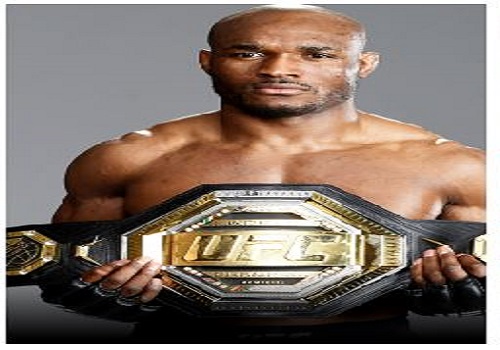 Twenty-six years after leaving fatherland Nigeria for the United States of America (USA) the Ultimate Fighting Championship (UFC) welterweight title champion Kamaru Usman is returning home to a hero’s welcome after conquering the world amassing an impressive 19-1-0 record from 2015 when he became a mixed martial art warrior.

Currently unbeaten in 18 fights, including 14 straight victories with nine Kos and nine decisions, the ‘Nigerian Nightmare’ in this chat with AKEEM LAWAL, shares his experiences so far in the sport and his plans to develop UFC in Nigeria. Excerpts:

Twenty-six years after leaving fatherland Nigeria for the United States of America (USA) the Ultimate Fighting Championship (UFC) welterweight title champion Kamaru Usman is returning home to a hero’s welcome after conquering the world amassing an impressive  19-1-0 record from 2015 when he became a mixed martial art warrior.

Currently unbeaten in 18 fights, including 14 straight victories with nine Kos and nine decisions, the ‘Nigerian Nightmare’ in this chat with AKEEM LAWAL, shares his experiences so far in the sport and his plans to develop UFC in Nigeria.

You were born in Auchi, growing up why do you choose wrestling ahead of football or athletics?

I don’t know. When we got to America, my elder brother, Dr. Usman chose football. I too started running but it got to a stage I got tired and told myself I had to find something else. So, in America, there are different sports, there are different opportunities for you to go into something else to excel. So I fell into wrestling and it eventually took me to MMA. And that is what we want to be able to do here. Have those different opportunities for the youths to be able to excel.

Your dad was in the Military, does that have any influence in you choosing a physical sport like wrestling?

No, I don’t think so. I think it’s just something that’s in you and you fall into it. With the right opportunity, you are able to fall into place. I don’t necessarily think it was him being in the military but the discipline definitely helps, of course.

How was your transition from wrestling to UFC?

Initially, it was difficult but I was more mental. Because even in wrestling it’s controlled to where there is still wide range of rules, things that you cannot do. So, switching over to a sport like UFC, where it seemed like everything is legal, though that is not the case. There are still rules as well. It was frightening a little bit, but once I got in, I started putting my foot in then it got better.

What was the impression of your parents following your transition from wrestling to UFC?

In your early stages, you earned your first nickname “Marty” when your former coach couldn’t pronounce your name Kamarudeen. How did you take that?

It’s normal. In everything that you are involved in, they are always going to find a nickname for you and that is how it was in wrestling. The name was difficult for them. They said it look like this name fits you and they place that name on you. As we know growing up, even here in Nigeria, my younger brother at a time we called him Udoma even when he was young. So it was just the origin of nicknames but at the end of the day, the nickname doesn’t stay with you if you don’t do something impressive with it.

At some point you were thinking of competing for United States at the Olympic Games in 2012, how true was that and what went wrong?

The goal after college wrestling was “what is the next level that I can wrestle.” The highest level is winning the Olympics games. So that was the plan. But while training there, you sustain different injuries, you go through different situations in life and that started to hurt my motivation, started to kill my spirit for that. So I needed to transition into something where I still had that fighting spirit, that burning desire to excel and I ended up finding MMA.

It was reported that while in college, a lot of universities were said to be interested in you in the US. At a point you left a school because they couldn’t take you to a particular competition. How true was that?

After High School, you go to college and I was wrestling in the college in this small school in Iowa, William Penn University. And during my first season we had a terrible snowstorm and the coach chose to take the Upper Class guy as opposed to me even though I was better than that guy. Actually it was a good decision because I think it was something that snow-balled me moving into another school and excelling. It worked out better.

How do you feel coming back home for the first time after over 20 years and do you think we have what it takes to produce more Kamaru Usman, Israel Adesanya and co as far as UFC is concerned?

Yes I feel amazing being home. You can be in several places all across the world but somehow they still find a way to make you feel like an outsider. So, coming back to be with my people, people that look like me, talk like me, walk like me and have that same energy, is something that is extremely special and I always wanted to feel. Absolutely, it’s one thing that Nigerians do very well. That is fight for everything that we have and everything that we want. With that spirit, I think if the right platform is in place, we can definitely have more Israel, more Sadiq Yusuff, more champions like me.

What goes through your mind each time you want to fight?

It’s different. Of course you have the fear because you are about to be in a fight. That fear is there, but being able to overcome that to me, is the definition of courage. Each and every time you feel that, doesn’t matter if it is your first fight, your last fight or your championship fight, the fear is always going to be there. The anxiousness, the anxiety, all of that are going to be there, but overcoming them truly makes a champion.

“We should not waste our time playing Nigeria, We can't stand them” - Ghana Parliament tells Black Stars of Ghana to forfeit their 2022 World Cup qualifying playoff